If so, keep reading. We’ll discuss an incoterm related to “waterway” transport.

It’s important for all businesses to know, especially if they get their supply by water.

That would be CIF incoterms, which translates to (Cost, Insurance, and Freight).

As mentioned before, CIF is an incoterm.

Developed by the ICC, incoterms are categories that classify shipments. And they do so based on “buyer and seller” responsibilities.

They describe who pays for what, and the liabilities/documents required by each.

Yes, there are 13 incoterms of them. They’re updated every decade or so.

The later includes 4/13 terms. And CIF incoterm is one of them.

So if your shipping schedules are land-based only, CIF doesn’t concern you.

Second – What Does CIF Mean?

It stands for (Cost, Insurance, and Freight).

The sellers pays costs, insurance, and freight compensation, while items are in transit to buyer.

After the item reaches the buyer’s port (import point), responsibility shifts to them. 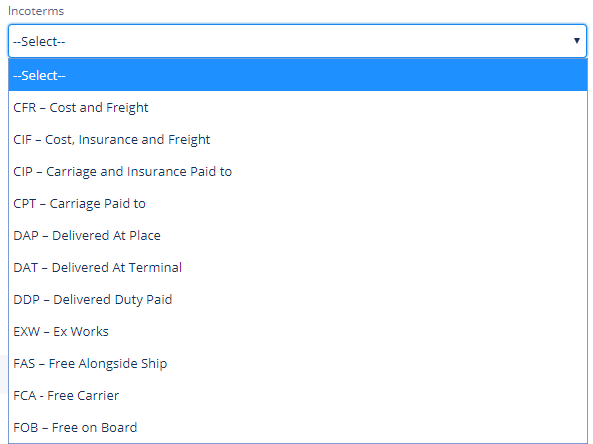 Let’s explain this with a concept.

In any shipment process, there’s a set of travel checkpoints. From start to finish, those are…

With CIF, sellers are only responsible for the first two parts.

They’re responsible for the costs, insuring the packages, loading/unloading, etc.

It’s the ONLY difference between CIF and “CFR” (another waterway incoterm).

If the item gets damaged onboard, there’s compensation. This usually isn’t the case with normal shipments.

Check the previous point. Look at the checkpoints we mentioned.

After the package reaches the “second port,” the buyer takes over. They must unload, and drive the package back to the final destination.

Now, this seems like a suitable arrangement for buyers. After all, sellers take care of costs. Also, they pretty much ship everything to port…

But that doesn’t make CIF shipping terms the best option for buyers.

And let’s not forget insurance issues.

If an item arrives damaged, a seller should reimburse the buyer. And the seller in-turn is reimbursed by the insurance company.

So while CIF forces insurance on packages – it doesn’t specify who the payout goes to.

In most cases, it’s the seller. And buyers receiving damaged goods need to contact sellers for their compensation.

And as is known, this can involve many delays, “proof of damage,” customer service issues, etc.

Many sellers do so. But it’s used with “less protected” and “expensive but delicate” items.

This means they aren’t stored inside the ship. Instead, they’re stored directly on the deck. Thus, they’re more exposed to damage.

The damage might be environmental, accidental or mishandling related.

With lesser protection comes the need for insurance. For that reason, CIF is an option.

But Why Not Ship “Containerized”?

Sometimes, this is not possible.

Sometimes, sellers ship CIF. And they containerize, but still pay for insurance…

They mainly do so to “private consumers.”

For example, if a business is selling “massage chairs” at $3000, expect it to be insured. This is necessary for the seller’s reputation, and to convince consumers of buying expensive products.

That’s for Sellers. What About Buyers?

As mentioned before, certain industries necessitate CIF. They include anything with large item shipments.

In those cases insurance becomes vital. And CIF becomes an option for both sides!